back to the 'masters' page

Among all the new and exciting features to enjoy at this year's Spruce Meadows 'Masters', there will be the spectacular dressage performance on Friday, September 9, part of the WestJet Evening of the Horse. Canadian CDI dressage winners Ryan Torkkeli and Pia Fortmüller will take centre stage and perform under the lights on the International Ring following the conclusion of the ATCO Electric Six Bar. Additional International Ring performances by Torkkeli and Fortmüller can be seen on Thursday, September 8 and on Sunday, September 11 prior to the start of the CP 'International', presented by Rolex.

Torkkeli and Fortmuller will also be one of the demonstrations taking place throughout the week of the 'Masters' in the Riding Hall and International Ring.

For those unfamiliar with Dressage, it is one of the three Olympic equestrian sports – the others are eventing and showjumping. The word “dressage” comes from the French word “dresseur”, which means training, and the sport involves showing off a horse’s training by performing a set of prescribed movements in front of a panel of judges.  In a dressage test, the rider and horse perform certain movements specific to the level at which they are competing. Each of these movements is scored out of 10 by a number of judges – up to seven at Olympic level – who are seated at different positions around the arena. Some particularly difficult movements received double marks, and the rider’s skill is also marked. The total marks are then converted into a percentage score for the combination – the higher the better.

In addition to the CDI dressage winner's demonstration,  we are pleased to present Vaulting Demonstrations by Diamond Willow Vaulting. Vaulting enjoys an ancient heritage and can probably be described as one of the oldest known forms of equestrian sport.  Modern vaulting was developed in postwar Germany as a means to introduce children to equestrian sport, and it remains a popular training and competitive endeavour all across Europe. Vaulting has experienced significant growth and expansion and is enjoyed by equestrian enthusiasts of all ages. All vaulting routines – team, individual, and freestyle – are performed on the back of a cantering horse, travelling in a circle and attached to a lunge line. 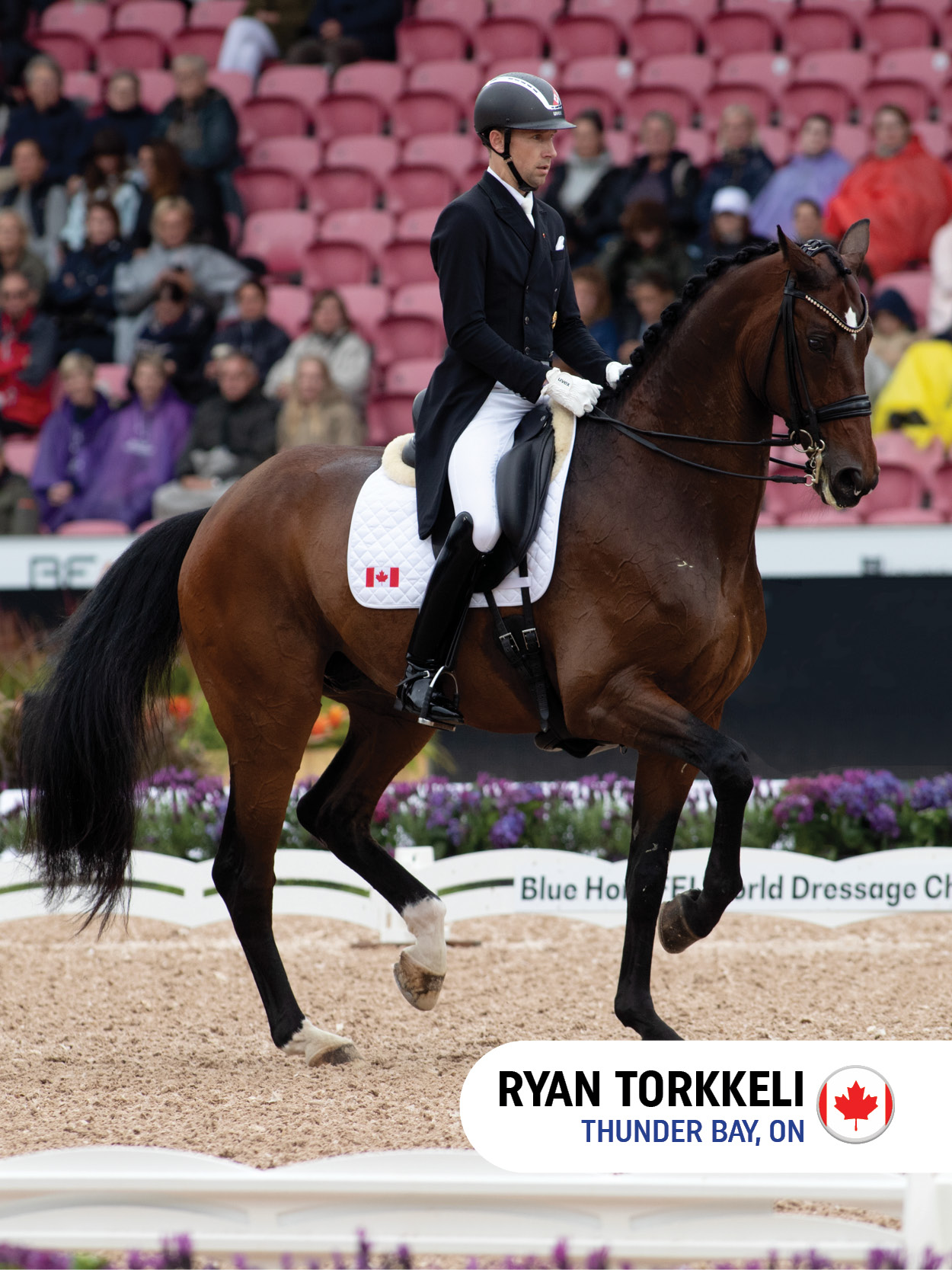 In 2021, riding Sternenwanderer (Lord Loxley I x Ragazzo), a 16-year-old Rheinlander gelding owned by Bolz & Dieter Laugks, Torkkeli began competing in FEI level competition and earned his first CDI victory in the Grand Prix Special at the CDI 3* in Deauville, FRA on July 18, 2021. The duo continued to compete in Europe’s most prestigious international dressage rings in Aachen and Hagen. Most recently, they would go on to win the CDI 4* Grand Prix Special in Stadl Paura, AUT. The pair secured their place on his first FEI World Championships team in Herning, DEN, representing the maple leaf. 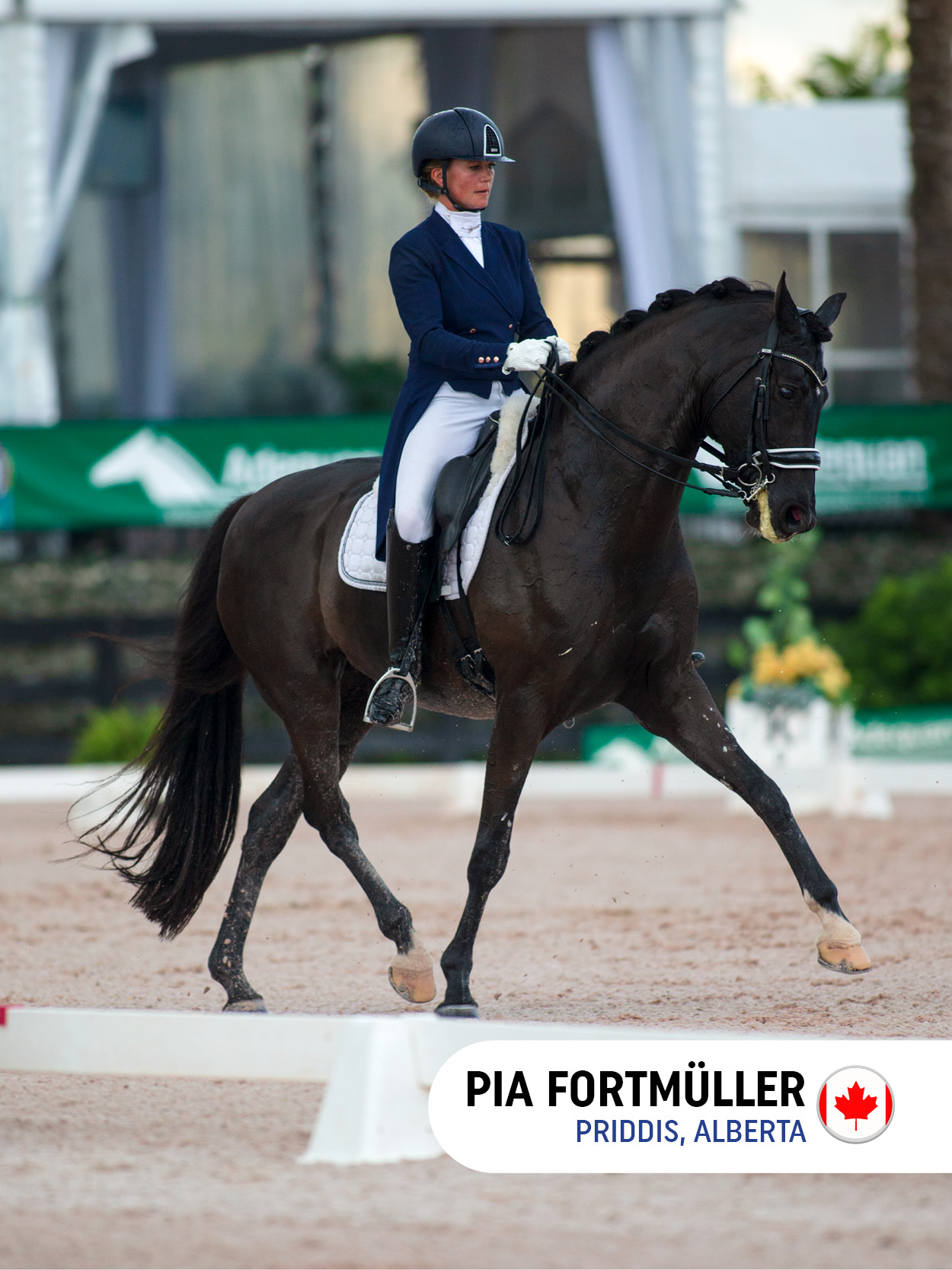 Photo credit: Cealy Tetley
Pia Fortmüller, Canadian CDI dressage winner, of Priddis, AB, has always been obsessed with horses since her childhood, with her mother being a passionate horsewoman herself. She represented Canada first as a Junior, then during Young Riders, winning double gold at the NAJYRC. Most recently, Fortmüller would represent Canada in 2016 at the World Young Horse Championships with her current mount Frieda (Fuerstenball x Rouletto), an 11-year-old Hanoverian mare owned by KMA Group, a mount Fortmüller has been training since she was two years old.
The Canadian duo competes in Wellington, FL, each winter, most recently, achieving scores of 70.457% and 70.255%, during the third week of the Adequan Global Dressage Festival. Besides competition, Fortmüller and her partner, Lars Busch, operate Dancing Feet Dressage, named with a nod to their respective careers as dressage trainer and farrier. 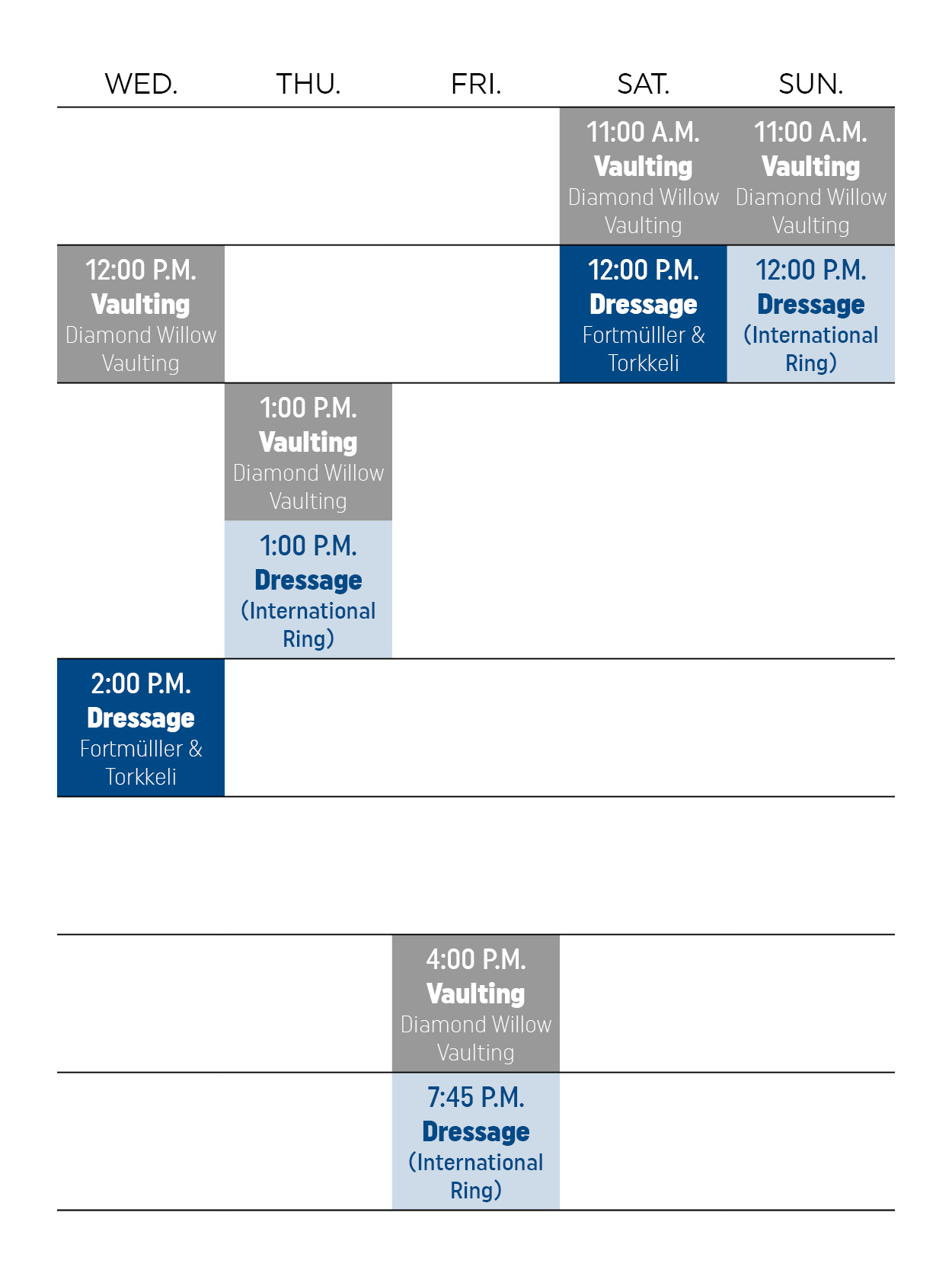