Occurs after two or more horses have equal faults after the first round and a tie for first place must be broken. The horse and rider will ride a shortened course against the clock. The winner is the horse/rider with the fewest faults in the shortest time.

An obstacle is considered knocked down when the height has been lowered by the horse and rider. Four faults per knockdown are added to the rider’s score.

A rider is considered off course if he or she has deviated from the order, or direction an obstacle is to be jumped. The course is outlined by the course designer before the competition.

The order of go can be determined in two ways; a seeded order is determined by performance rankings in previous competitions or a random draw where numbers are drawn out of a hat the night before so that each competitor has an equal chance of attaining a favourable position.

The wooden poles or planks used on the obstacles. Rails must be a minimum of 6 feet in length and 4 inches in diameter.

When a horse stops or runs off to the side on approach to an obstacle in an attempt to avoid jumping the fence. Four faults are assessed for the first refusal and elimination after the second.

A stride is one gallop step for a given horse. Each horse has a different length of stride that his rider must know, but the average distance covered in one stride is 12 feet.

A decision on the riders’ part to cease competing in a given competition due to injury, trouble negotiating the course, or because the rider knows too many faults have been incurred to result in a good placing.

Riders preview their upcoming competition by walking the route they intend to ride. The horses never see the course beforehand and this is the only time the rider gets to look at the course. The riders pace off the distances between the fences and determine how best to adjust their own horse’s strides to make the distances. Riders will also take note of the different types of fences offered, their relationship to one another, the footing and other potential problem areas.

JUMP-OFF
In the world of Show Jumping, a jump-off is a regular event of any large tournament, providing excellent sport and excitement. In the jump-off, the entrants negotiate a demanding course which may encompass as many as eight obstacles, all large in size but varying in form. During the first round a tie may occur when two or more competitors jump clear with no faults, or remain tied for first place with an equality of faults. The tie is then settled with a jump-off. In the jump-off, speed and leaving jumps up is the only formula for winning. The jump-off involves the horses and riders negotiating a shortened course, and the winner will be the combination with the quickest time and the least number of faults.

ONE ROUND
This is a competition against the clock where horse/rider combinations negotiate the course as quickly as possible without accumulating any faults. For each jump knocked down, four faults are added to their score. If the horse refuses a jump four faults are also added. If the horse refuses a second time the combination is eliminated. Should the horse or rider fall or go off course, they are also eliminated. The Course Designer will also set a time allowed in which the riders must complete the course. They are penalized one fault for every four seconds or part of four seconds over the time allowed. The winner is the combination that jumps the course with the fewest faults in the quickest time.

DERBY
The Derby is the decathlon of the show jumping world. Just as the decathlon tests endurance, speed and skill in track and field, so does the Derby for the show jumping. Like the decathlon, with its set schedule of events, the Derby course never changes from year to year. The course features almost twice the number of obstacles, such as the banks, the water jump and the notorious Devils’ Dyke. Victory is difficult, and usually the course designer anticipates that less than 10% of the field will return for a jump-off. Jump-offs are rare in the Derby and a pair of clear rounds from a field of forty would be both unusual and impressive, so enjoy it if it happens.

PARCOURS DE CHASSE | Speed
A speed competition differs in that the horse/rider combination typically negotiates one round with speed becoming the key determining factor overall. The ultimate winner of the competition will be the pair of athletes who cross the finish line with the least faults and the fastest time over the one round. In the Parcours de Chasse, knockdowns are converted into seconds, making it possible for a very fast horse that has a rail down still win the event, so look for the turns to become a little tighter and the pace a little quicker once the rail falls. Obviously, the best route to victory is still a fast clear round, but anything can happen when the speed horses are on course.

GRAND PRIX | Two Rounds
A Grand Prix presents competitors with as many as sixteen difficult jumps including combinations of double or triple obstacles. After completing the first round of the Grand Prix, the top twelve horse/rider combinations from the first round (or all clear rounds), return to the second round, where the jumps are much higher and wider. A jump-off takes place only if there are two or more double-clear rounds.

NATIONS' CUP | Team competition
The Nations’ Cup is the only competition in which nations are represented by selected teams. Each team consists of three or four-horse/rider combinations and a Chef d’Equipe. Each member will jump one round over a course of 12 obstacles. The best three scores are added together for the first round total. The top six teams return in reverse order of their first-round placing to jump a second round over the identical course. First and second round totals are then added together to determine the ultimate winner. In the event of an equality of faults, a jump-off takes place with one rider per team selected by the Chef d’Equipe.

VERTICAL FENCE & GATE
These planks are one of the many types of vertical jumps. It is a straight-up and down fence of any height without spread or width to it. Although it looks relatively simple to the spectator, it is actually one of the most difficult fences to jump. The Gate is another type of vertical jump; this is a straight up and down gate of any height, usually with rails above it.

VERTICAL WALL
This is a type of vertical jump. It can be especially difficult for some horses to jump because it is solid – a horse can not see through it. 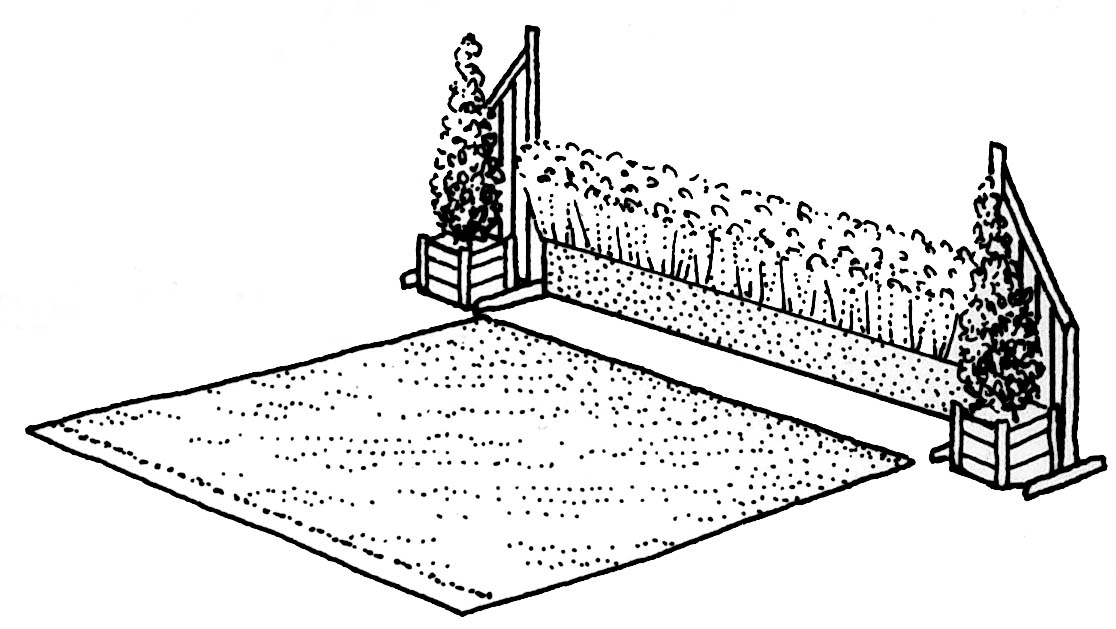 WATER JUMP
This obstacle asks the horse to jump a wide stretch of water – usually 10 to 16 feet in width. A low hedge or fence usually marks the leading edge of the jump and the horse must clear the plasticine lath on the far side of the water or he incurs jumping faults. This jump can be very deceiving for the horse. He perceives the water as being a big hole, so it is very important for the rider to keep his horse’s head up upon approaching so the horse doesn’t have the opportunity to see the water.

OXER
This fence tests not only the horse’s ability to jump high, but wide as well.  The parallel oxer, in which the front and back rails are equal height, is the most difficult type of oxer jump. 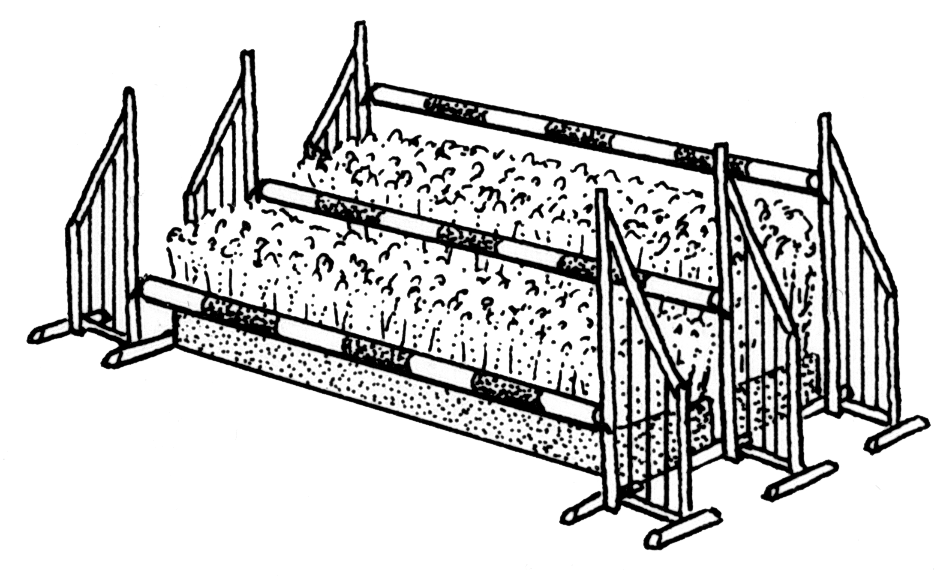 TRIPLE BAR
This jump uses three sets of standards with rails and graduating heights to make a spread-jump. This is a relatively easy jump although usually very wide. Spreads can get up to 6 feet wide, and heights up to 5 feet, so the horse must jump out as well as up.

DEVIL'S DYKE
This is a triple combination jump with a rustic touch. Although the fences are not very high, they give the appearance of an “airy” rather than a “solid” fence. The horse must jump two natural rails on the first element, take one stride downhill, then jump a two-rail obstacle over a water ditch, and after another stride, jump uphill out of the Devil’s Dyke over another two-rail vertical.

COMBINATION
This is a series of two or three jumps, set one or two strides apart. Combinations are very demanding because if the first element is not jumped correctly, it is very difficult to correct the horse in the short space before the next element so that it can clear the rest of the combination. If the horse has a refusal at any one of the obstacles in the combination, they must attempt the whole combination again.

While Horse/Rider combinations qualify to compete at different levels and division types, all of the following events are considered ‘Jumping’ events.Junior/Amateur Division Open to all riders under the age of eighteen and athletes with amateur status aged eighteen or older. Spruce Meadows typically offers this division to riders competing between the 1.10m to 1.40m levels.

Open to all riders including professional athletes; riders under the age of eighteen and those with amateur status. Spruce Meadows typically offers this division to riders competing between the 1.10m to 1.40m levels.

Open to all Horse/Rider combinations with valid FEI Passport, qualified to compete each tournament through an FEI Jog (Vet Inspection). These are the most challenging events at Spruce Meadows including the largest, most difficult courses; requiring a great deal of skill and athleticism. FEI divisions are set at the 1.45m to 1.60m levels.

This series of four competitions are open to riders between the ages of 16 and 25 years, entered in FEI Division Jumping throughout the Summer Series of Tournaments. There will be a series award to the top placed athlete who receives the most points over the four competitions.